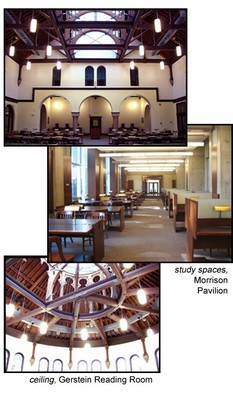 2004 - the Morrison Pavilion was awarded:

The heritage wing of the Gerstein Science Information Centre is designated under the Ontario heritage Act and is on the City of Toronto's list of heritage properties.

On Valentine's Day 1890 a fire in what is now University College destroyed the university's library.  An international campaign for donations was launched to rebuild the collection and the building.

In 1892 the new university library opened at 7 King's College Circle. There was seating for 160 men and women in separate reading rooms. In 1910 the expanded stack space now known as the heritage stacks opened and housed the entire collection.

The Library continued to grow and a substantial gift from the Samuel family led to the construction of the Sigmund Samuel Library in 1954/55 adjacent to the 1892 building.  The stained glass window above the current main entrance is the Samuel family crest.  The Latin phrase below the coat of arms, "Honos Alit Artis" (honour exalts the arts), embodies the mission of the library to foster the pursuit of knowledge. 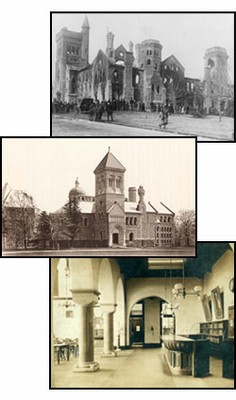 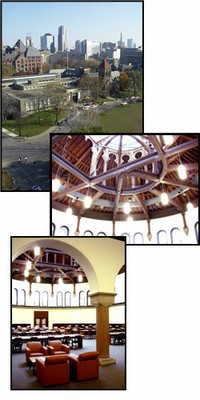 In 1973 the humanities and social sciences collection moved to the new Robarts Library Building, leaving behind the undergraduate library in the Sigmund Samuel wing and the science and medicine collections in the original building which became known as the Science and Medicine Library.

In 1997, the Science and Medicine Library recognized its benefactor, The Frank Gerstein Charitable Foundation, and renamed the collection the Gerstein Science Information Centre in the Sigmund Samuel Library Building.  At that time, the undergraduate humanities and social sciences material was integrated into other library collections on campus, and the much needed space was made available to the growing medical and science collection.

The library collection continued to grow and quickly filled the building. Donations from the Morrison family enabled the construction of the The Morrison Pavilion which was completed in the fall of 2002. Dedicated to the needs of the students, 22,000 sq ft were renovated and 32,000 sq ft of study space were added to the 5 existing floors. Six hundred and fifty new study spaces were added, as well as additional space for the collection on both static and compact shelving.

The southern heritage wing was renovated in 2007/08 thanks to donations from the Bertrand Gerstein Family Foundation and the Frank Gerstein Charitable Foundation.  The resulting Marvin Gerstein Conference Room and the Gerstein Reading Room, with its stunning skylight, provide handsome and comfortable workspace in harmony with the historic features of the original 1892 building.

October 3, 2010 marked the centennial of renovations and expansion of the main library of the University of Toronto which first opened  in 1892.

The 1910 renovations to the original building included an entire wing,  with glass floors,  for 250,000 books, new reading rooms, an elevator, and other special features.  See the description of the new library which appeared in The Varsity, October 4, 1910 (pdf)

Watch a this 4-minute video outlining the history of the building:

This year marked the 125th anniversary of U of T Libraries & Gerstein. 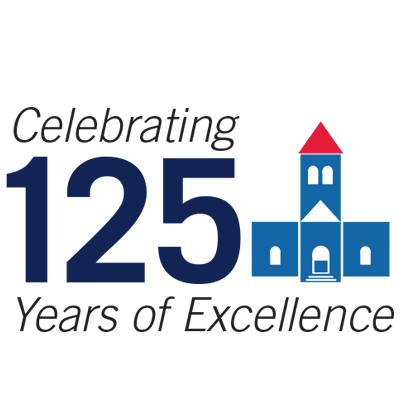